Skip to content
Home/Leadership, Organizational Excellence, People/Diffusing the Drama Triangle: How Leaders Need to Examine (and Change) their Role in Work Relationships

Diffusing the Drama Triangle: How Leaders Need to Examine (and Change) their Role in Work Relationships

Do you have a Hero in your company?  A leader that solves everyone’s problems?  They are the ‘go to’ person, the sponge for all things needing to be done. As attractive as this might sound, this can be a symptom of a deeper, significant problem. This behaviour can actually be a pattern that is crippling your business, creating an unhealthy dynamic that undermines the culture of the business and limits growth. Teams caught in the Drama Triangle need to learn new roles in order to step outside of it and become truly effective.

When I run into a leader that falls into this Hero role, I’ve also noticed they tend to be the one short on time, struggling to execute all of their roles and responsibilities. This behaviour is a clue that the Drama Triangle is at play in their team. When I see these indicators, I explain what the Drama Triangle is, how it works, and share alternative roles for their relationship dynamics. I have seen the impact awareness of this concept has had on my leaders, so I would like to share this with you.

Let’s take a closer look at the Drama Triangle and how all leaders can benefit from understanding it, examining their work relationships and making changes, when necessary.

What is the Drama Triangle? 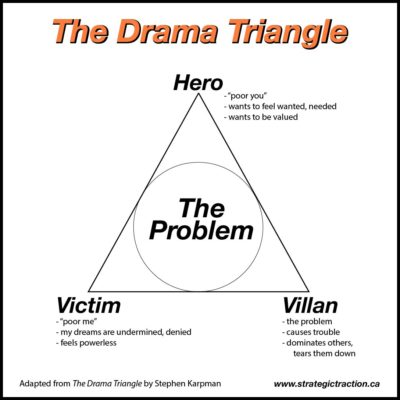 This Drama Triangle, also known as the Karpman Triangle, is credited to psychiatrist Dr. Stephen B. Karpman. Though I use slightly different terminology, the concepts we’re discussing remain the same. For our purposes, these are the key players in the Drama Triangle: Villain, victim, hero.

How does the Drama Triangle Work?

The Villain is the trouble causer, often dominating, blaming others or tearing them down. They tend to see the Victim as weak and irrelevant. By attacking them, the Villain is actually trying to protect themselves against an attack.

The Victim then comes to the Hero. They play the ‘poor me’ card and it looks something like this, “Oh my! The Villain did something bad to me.” The Victim’s dreams/ideas/actions are dashed/thwarted/undermined. They plead with the Hero, “What am I going to do?”

The Hero, being the benevolent person that they are, responds something like this, “Poor you, don’t worry. I’ll help you right this wrong!” The motivation for the Hero can be a need to feel wanted and valuable. The Hero is often genuinely trying to help but in doing so, undermines the Victim and keeps them in a subservient role. I have even come across Heroes that were intentionally orchestrating this dynamic. They were hoarding information and limiting others in an effort to ensure that they remain the center of power.

It’s a vicious cycle and it goes round and round, creating massive problems and dysfunctional behaviours. As leaders, we often play the Hero. I’ve seen it with many of my clients, and yes, I’ve lived it too. But if we keep playing the Hero, we are not helping our team. We’re wasting significant energy and time, thereby limiting our growth.  So, how do we change it?

Diffuse the Drama Triangle by Transforming It

Our teams, and us as leaders, must transition out of this dysfunctional pattern and into a healthier, empowered dynamic to be effective. It will save both time and heartache in our businesses and provide an opportunity for growth.

It only takes one of the players to shift and it will stop the vicious cycle. 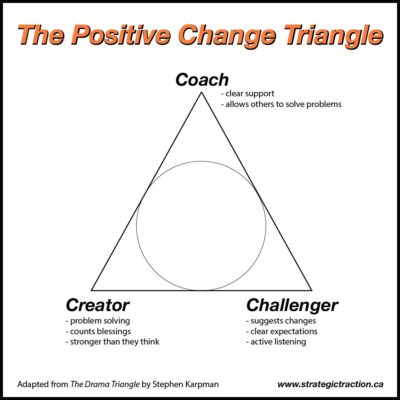 The Villain transitions into the Challenger. Challengers are the person that will be the impetus for change. Conflict can be healthy if approached in the right way. They can be rigid in their thinking, so they may need to learn how to share their ideas in a more constructive manner.

The Victim transitions into the Creator, the person that can initiate positive change in the organization. Victims need to learn how to communicate what they need and take healthy action themselves. Along the way, they may need a reminder to be grateful for what is good in their life and that they control their lives.

The Hero transitions into the Coach. Rather than solving the problem, the Coach helps the Creator solve their own problems. That’s what’s going to break this vicious cycle. The Coach must give support, without taking on the problem themselves. Coaches need to give some encouragement to the Creator as they often lack confidence and aren’t used to doing things on their own. Coaches also may need to manage their time they spend on this and give clear choices about what the Creator’s options are.

As a leader, we may fall into the trap of the Hero, but if we can shift our role to that of the Coach, we can break the Drama Triangle cycle. You will have more pleasant working relationships and free up time to spend on more meaningful work, moving your company forward. Together the Creator, Coach, and Challenger can break the Drama Triangle cycle and they can bring about tremendous positive change in our businesses.

To build a great business with an awesome culture, we need to help our teams avoid dysfunctional behaviours and lead them into a healthier, more empowered dynamic. If you see the Drama Triangle at play, ACT! Address it with your team and set the stage for a new way of dealing with conflict. Don’t let the Drama Triangle derail your business.

About the Author: Chris Jones

This blog is a work of passion for me. I LOVE helping leaders create powerful transformation in their business and lives. What better way to share the many lessons I have learned from 21+ years as an entrepreneur? Chris Jones is a successful, seasoned, award-winning entrepreneur who gets a charge out of helping leaders navigate their way through powerful, transformational growth in their business and ultimately, their lives. He is a full-time, Certified EOS™ Implementer.

This site uses Akismet to reduce spam. Learn how your comment data is processed.